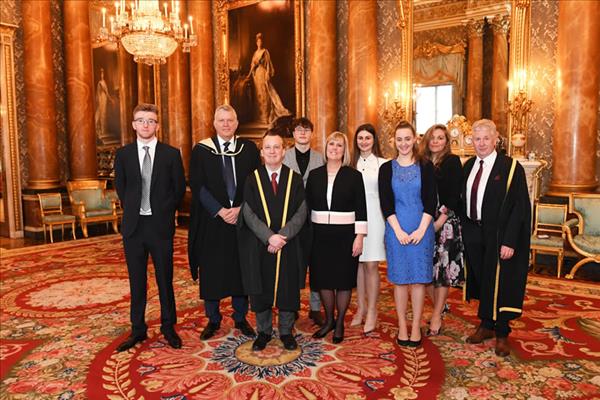 In a glittering ceremony held at Buckingham Palace, Dudley College of Technology has received a Queen’s Anniversary Prize for Education. The Queen’s Anniversary Prizes are granted by Her Majesty the Queen, and are a UK-wide award recognising excellence, innovation and public benefit in work carried out by UK colleges and universities. The Prizes are the highest national Honour awarded in UK further and higher education.

Representatives of the college including students from across the curriculum attended the ceremony which was presided over by HRH The Prince of Wales, with HRH The Duchess of Cornwall.

Commenting on the award Chief Executive and Principal Neil Thomas said: “To receive a national honour such as the Queen’s Anniversary Prize for the college’s work is a privilege and one which affirms the significance of what takes place here. We have been recognised for the way that we have brought technical education back to life and have helped to drive the regional skills agenda. Through our investment in the Dudley Learning Quarter, in particular the high technology training centres: Evolve, Advance I and Advance II, we have spatially transformed the town’s landscape. I believe the work of the college has helped to restore pride and ambition for young people and adults in the borough. So this award is a recognition as to how far we have come and the positive impact on the lives of our learners.”

Endorsing these comments Chair of the college’s Corporation: David Whatton added: “To be one of just four Further Education colleges nationally to be awarded this honour is a great moment for Dudley. The college is at the heart of the community and direct benefits are being delivered at a local, regional and national level because of the high quality of the education provision provided here. This is a moment to savour for all of the students, employers and parents who put their trust into the staff of Dudley College for their training needs and a moment of recognition for those staff that they are right to do so.”

Amongst those attending the event at Buckingham Palace were Engineering Apprentice Bethany Jones and Dudley Sixth A level student Emerson Hanslip. Remembering the occasion Bethany said: “I was so proud to be one of the students attending this ceremony, it is a huge honour for me to be representing the College and meeting HRH The Prince of Wales and Duchess of Cornwall. Studying at Dudley College has opened up so many opportunities for me and this is one I’ll definitely never forget!”

Adding his own reflection Emerson said: “The Prince seemed genuinely interested to talk with me and understand how the college was helping me with my own career goals. One of the things I’ve learnt during my time at college is to be confident so speaking to Royalty didn’t faze me at all.”

This year ninety-eight entries were received for the Queen’s Anniversary Prizes and Dudley was selected as one of only four FE college winners. To date there have only been 45 FE college recipients of the 253 prizes awarded since the inception of the programme in 1994.

The Queen’s Anniversary Prizes have been running for over 25 years and are considered one of the most prestigious awards in the education sector. The scheme runs on a two-year cycle and is managed by The Royal Anniversary Trust.