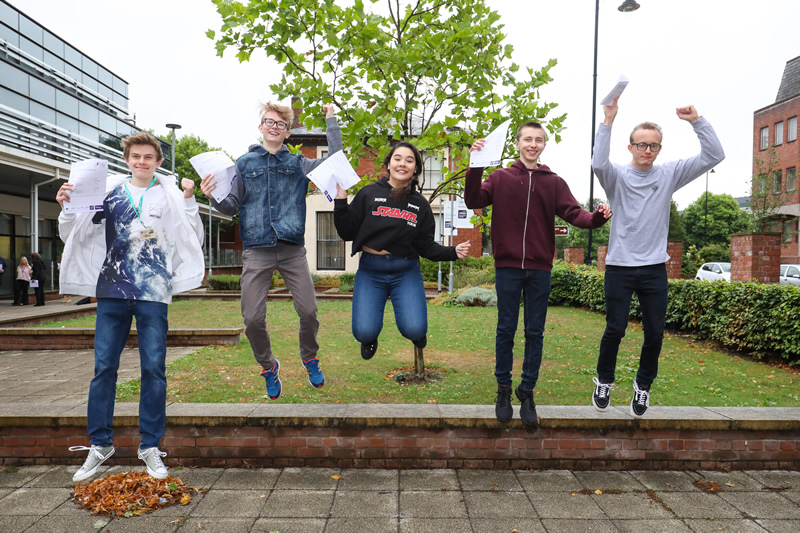 Dudley Sixth College students have again excelled in their A Level studies, with an overall pass rate of 98%, which is above the national average and shows a consistent picture with last year’s results. Most pleasingly this year also saw a 5% increase on 2017 of the number of entries obtaining high grades (A*-C).

A 100% pass rate was achieved in 27 of the 36 subjects on offer at Dudley College of Technology with subjects such as: Law, Biology, Communications and Culture, Accounting and Economics achieving a huge number of high grades.

Dudley College Principal Neil Thomas, joined the celebrations along with students and staff from the College’s Sixth form. Commenting on their achievement he said:

“It always makes me proud when I see Dudley Sixth students achieving so much – we have seen a real increase in the number of learners achieving high grades which is especially pleasing as our students are now facing the new highly challenging linear examinations.

But the real success is seeing our students taking up University places across the country or choosing to stay here in Dudley to pursue their dreams of higher education.”

Individual outstanding success stories include Tom Bailey (aged 18) who achieved A in Mathematics, A in Biology and B in Chemistry. Commenting on his time at Dudley Sixth Tom said:

“Dudley Sixth allowed me to study in a fashion that suited me and gave me the skills and resources to do so. There is a friendly environment, which is bot relaxed but motivating.”

Tom is one of the many students choosing to study at a local university and will be taking up a place at the University of Birmingham to study for a BSc in Biomedical Science. Commenting on this decision Tom said: “We have first- rate universities in the region, so it just made financial sense to live at home and study locally.”

Fellow student Isabel York (aged 18) who gained grade A* in Textiles , A in Biology and A in Psychology was particularly proud of her achievement as she had devoted hundreds of hours to her studies, even choosing not to work part-time so she could concentrate on her studies. Commenting on her progress Isabel said: “I’m delighted it paid off as I have secured my place at Birmingham University to study for a degree in Human Biology. I’ll be fulfilling a long held ambition. My parents will be delighted!”

Individual outstanding success stories include Tom Bailey (aged 18) who achieved A in Mathematics, A in Biology and B in Chemistry. Commenting on his time at Dudley Sixth Tom said:

Lisa Stevenson Head of Learning for Dudley Sixth, who took over the management of Dudley Sixth’s A level programmes at the start of this academic year, put the excellent results down to the hard work of both staff and students saying:
“ I have an incredibly dedicated team of staff. Not only do staff who teach individual subject specialisms work hard to help each student get the best grades they are capable of but all of the support staff want the very best for each student helping them with their University applications or next step into higher Apprenticeships or work.”

Hannah Gowing (aged 18) gained an A* in Psychology, and A in Biology and two Bs in Chemistry and Mathematics, expressing relief she said: “The waiting for results is over – now I’m on top of the world.” Hannah’s mum Michelle who accompanied her to collect her results was equally delighted saying: “She deserved to do well, she worked so hard. In fact I had to drag her away from her studies, so she could have a break.”

Oliver Amos who secured a place at the University of Sheffield to read Law after achieving grade As in Law and Psychology and a B in History, offered the following advice on how to do well: “Practise exam papers – over and over – get feedback and keep going.”

The 18 -year-old from Oldbury added: “I want to thank my teachers for their support. I couldn’t have done this well without them!”

Dudley College is currently taking applications for September admission in A Level and vocational subjects. Higher education courses are also available at the college. Students who are interested in joining should telephone 0800 783 6095 for further information or visit www.dudleycol.ac.uk

To see more of our successful students see our Flickr album